The Amsterdambased artist Bert Wouters (1959) will exhibit his work in cooperation with Bubble Projects at the Olympic Art Games 2012 inLondon. The artworks will be exhibited from 14 July till 14 august in the National Headquarter of the IOC at the Hilton onPark Lane. The painting of the Amsterdam Olympic Stadium (1928) is part of Wouters’ contemporary deck of Art Cards painted in 2009 and 2010 in acryl on linen in the sizes 120cmx80cm. His love for architecture made it possible to put 400 years ofAmsterdamarchitecture in this special deck of cards. The World Premiere exhibition of the 20 original paintings took place at the World Championships Bridge 2011 in theNetherlands.

This year it’s 100 years ago the first Art Games were held at the Olympic Games. InStockholminitiator and founder of the modern Olympic Games, Pierre de Coubertin, handed out medals to art inspired by sports. In 1954 the Art Games were removed from the program.

Bubble Projects will organize their own Olympic Art Games inLondon. 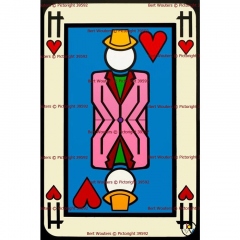